If you been to the last few Dreamforce conferences, or had a Salesforce sales person in your office, you’ve heard their pitch.

Salesforce’s Chatter was one of the first enterprise software that mimicked the look and feel of Facebook.  The beauty of a Facebook-like interface is no training required!

The interview make sense as you want to design enterprise software in the way that works best for end-users.

From the test drive, it appears they are being one step closer to being the Microsoft SharePoint Killer.

Take the latest iteration of Box.net, for example. The five year-old cloud-based, document-sharing and collaboration utility is currently used in 10,000 companies.

Today, it released new features that have taken a page from social networking. A discussions page (above) adopts the commenting paradigm you’re used to seeing in Facebook.

And real-time notifications, that keep team members apprised of any changes being made as they happen, reflect the real-time world that Twitter and other social networks have gotten us accustomed to.

A lot of Box’s new features “are driven by the consumer Web, and what we’ve learned.  But a lot of it is also just driven things that you would expect to see if you could design enterprise software in the way that works best for end-users.” 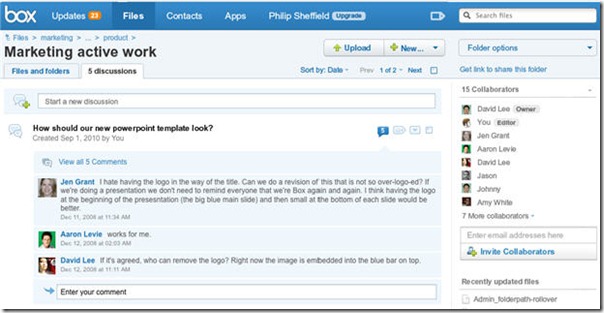