In January, I reviewed Okta: One Stop Shopping with Single Sign On?

Some users may be familiar with Chrome OS, which displays all the cloud services as big "app" icons.

As companies embrace the cloud, a secure single sign-on is the first step from controlling data and apps within your users.

But it may not be enough, as major companies are moving to the hybrid cloud: both public and private clouds.  Hardware vendors are quick to promote this, of course.

VMware unveiled Horizon App Manager this week, which is an IT solution for provisioning and managing public and private cloud-based services.

Microsoft has put a great deal of focus on the accelerating adoption of cloud-based SaaS solutions among corporations who want the ability to deliver and run applications on the widest array of hardware possible.  VMware’s Horizon App Manager is joining the ranks for control, visibility, and compliance aspect of these services.

For $30 per user, per year subscription, IT admins get a hosted tool to provision access to Web-based SaaS apps including Google Apps, Salesforce, SuccessFactors, Workday, Zimbra, Mozy and Box.net.  Social media includes Facebook, LinkedIn and others.

No further credentials are needed once they are in the portal, and it supports Safari 5, Firefox 3.5, and Internet Explorer 7+.

"End users have a single sign-in experience, while admins have the ability to ensure that security and passwords stay behind the firewall," Director of product management Noah Wasmer said. "We want to ensure that there’s a granular level of access for all these different types of apps as well as controlling the data."

Horizon App Manager is available today.  A good video with an overview with Noah Wasmer is also on their product page. 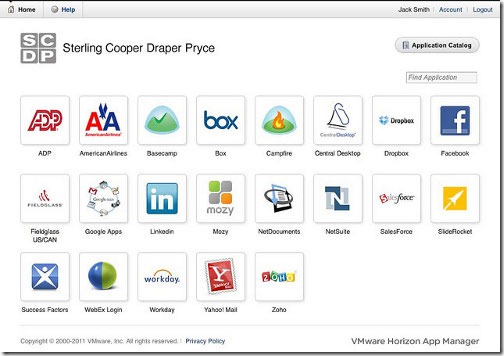