Macy’s ranks number one retailer in US, while House of Fraser tops UK and global rankings

Overall improvement in scores, but retailers still underperforming at sign up, subject lines and mobile optimization

London – The top online retailers in the US are underperforming at critical elements of email marketing, including sign up and subject lines, a new report from email marketing specialists dotMailer has found. Hitting the Mark: Email Intelligence Report 2013/14, reveals that over three quarters of the US’s top online retailers are still failing to create email marketing campaigns that are fully optimised for mobile devices, despite recent numbers indicating over a third of email is now read on email.

The report, available to download at dotMailer.co.uk/retail benchmarked 60 online retailers, taking the top 30 in the UK and US, against a set of 27 criteria including shareability, design, rendering and landing pages. This year, new scoring criteria were developed to embrace recent developments in email marketing strategy, such as mobile optimisation and responsive design. Overall, performance has improved by 8% since the last study in 2011, with the average total score amounting to 73%.

Hitting the Mark: Email Intelligence Report 2013/14 is the first iteration of the dotMailer report to benchmark US retailers, and the global runner up and US victor was Macy’s, scoring 90%. Macy’s reportedly saw a 41% surge in online sales last year, indicating that its sound digital marketing strategy is paying off.

House of Fraser topped both the UK and global chart, a feat made more impressive considering the retailer scored zero in 2011 and was generally late to ecommerce in not launching a transactional site until 2007. Email marketing now appears to be a core part of its multi-channel marketing strategy, hitting 91% of the overall criteria. 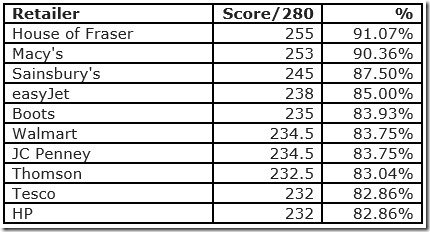 Across the board, the report found the top retailers are getting most of the basics right, with well-observed legitimacy, clear unsubscribe processes and strong calls to action.

Landing pages for campaigns were generally mobile optimised with an average score of 84%, however where retailers fell down was optimising the email content itself for mobile devices. Disappointingly, only 23% of emails assessed across the 60 retailers included code to adapt the content to smaller screens, a figure that was even lower for US retailers in particular, at 14%.

Tink Taylor, Managing Director of dotMailer, commented: “Having scored the top UK retailers for a number of years it was fascinating to see how their US counterparts compete. dotMailer has recently opened an office in New York so we were intrigued to see how the two markets compare. Interestingly, the US and UK are markedly similar in what they get right and what could be done better when it comes to email marketing, with the UK just about edging the US by five points out of the 280 total. The scores for mobile were a surprise, particularly as a third of all email is now read on a mobile device. Optimisation for mobiles is becoming less of a bonus and more of a requirement for today’s marketers.”

Founded in 1999, dotDigital Group plc has grown to become a leader in the provision of intuitive Software as a Service (SaaS) technology and tools for digital marketing professionals. The core product range of dotDigital Group consists of: