Device shipments are a cornerstone figure for a plethora of derivative forecasts, such as, for example, mobile app sales growth, and is therefore of interest on this blog on cloud computing. 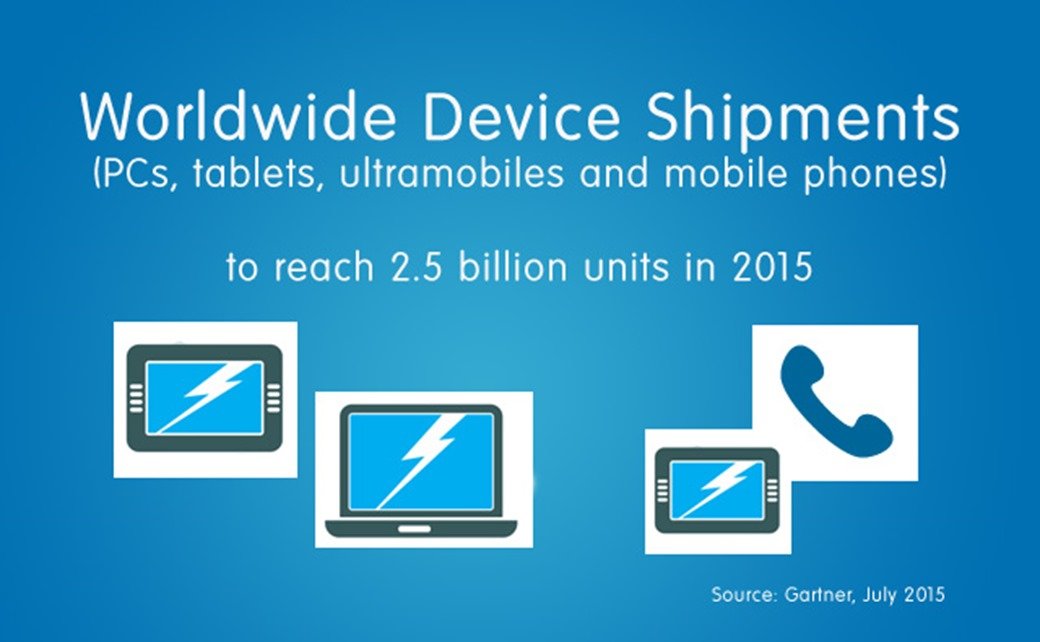 Device shipments is to reach 2.5 billion units in 2015 on a worldwide basis, explained research firm Gartner in a press release earlier this week.  It represents a modest 1.5% annual increase, which is a downward revision from its prior 2.8% growth forecast (see Table 1).  Gartner defines devices as PCs, tablets, ultramobiles and mobile phones.

“Our forecast for unit shipment growth for all devices in 2015 has dropped by 1.3 percentage points from last quarter’s estimate,” said Ranjit Atwal, research director at Gartner. “This was partly due to a continued slowdown in PC purchases in Western Europe, Russia and Japan in particular, largely due to price increases resulting from local currency devaluation against the dollar.”

The only market that continues to show growth is the mobile phone market where, in contrast, prices continue to fall. The emerging markets are driving the smartphone market upward, with China leading the way.

Note: The data has been rounded up, which may affect the overall growth rate.

The end of the migration from Windows XP negatively affected the PC market globally during the first half of 2015; however, the greater impact remains the currency depreciation against the dollar. PC vendors are increasingly reducing their inventory levels — by at least 5 percent until the end of 2015 — as a way to minimize pricing exposure in the channel.

The global PC shipment market is expected to total 300 million units in 2015, a decline of 4.5 percent year on year. “We do not expect the global PC market to recover until 2016,” said Mr. Atwal. “The release of Windows 10 on 29th July will contribute to a slowing professional demand for mobile PCs and premium ultramobiles in 2015, as lifetimes extend by three months. However, as suppliers and buyers adjust to new prices, Windows 10 could boost replacements during 2016.”

“The tablet market is hit by fewer new buyers, extended life cycles and little innovation to encourage new purchases,” said Roberta Cozza, research director at Gartner. “At the same time, the value of a smartwatch for the average user is still not compelling enough and the impact of these wearables on tablet purchases remains negligible. The tablet has become a “nice to have” device, and there is no real need for an upgrade as regularly as for the phone.” Gartner analysts also witness users relying more on their smartphones as functionality increases and screen size standardizes at 5 inches. This is affecting the appeal of smaller tablets in markets such as Western Europe and North America, beyond Asia.

As a result, Gartner has extended the average lifetime of the tablet to three years by 2016. “We also expect the tablet market to reach a penetration close to 50 percent of households in mature markets by 2016, which is soon,” added Ms. Cozza.

The mobile phone market growth rate is expected to slow down to 3.3 percent growth in 2015. “The global market has been affected by a weaker performance in China. We have witnessed fewer and fewer first time buyers in China, a sign that the mobile phone market in there is reaching saturation. Vendors in China will have to win replacement buyers and improve the appeal of their premium offerings to attract upgrades, if they want to maintain or increase their market share,” said Annette Zimmermann, research director at Gartner.

“Vendors looking to grow their performance in the global smartphone market will be challenged to quickly enhance their expansion into emerging markets outside of China, where we still witness a sizeable share of feature phones and an opportunity for double-digit smartphone growth,” concluded Ms. Zimmermann.