CRM fistfights aren’t the only applications in the cloud vying for your money and loyalty.

But the big news this week came from Google and the Gmail team.

I call it the end of the Conversation or threaded mode.

While I love threaded mode in newsgroups, I initially hated the conversation mode because it was too easy to miss an important email as it got nested with countless subsequent messages on the same thread!

But like a leaky faucet, I got used to it.  Often, while composing a message, I would get an alert that someone added the conversation. 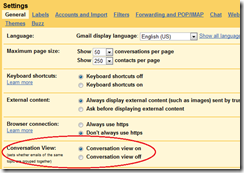 From their official web site:

"We really hoped everyone would learn to love conversation view, but we came to realize that it’s just not right for some people.  So today we’re introducing another valuable choice. Users who prefer a traditional inbox can toggle off conversation view to see email as individual messages in chronological order."

"Threading enthusiasts say they spend less mental energy drawing connections between related messages and that their inboxes are much less cluttered. On the other hand, email traditionalists like many former Outlook users think conversation just complicates something that has worked for years."

I know from experience you can switch off Conversation or threaded mode with slow connections.  That option always was available on the bottom of the page under “Basic HTML”.

I am referring to my experience with dialup connection… don’t you hate it when a hotel advertises “data port for Internet” on their amenity features?   Yes, that means dial-up!

So during those times when I am at a remote site in South America, I always switch to Basic HTML.

One Door Closes, Another Door Opens

To make it the same look and feel as a full featured desktop client, such as Outlook 2007, Google has added Priority InBox.  Yes, you had “starred” messages (i.e. flagged) in the past, but now you have 3 levels of granularity with Gmail.

I already discussed how you have a mini version of a preview pane using Gmail.

At the end of the day, all you will need is a browser and an Internet connection.