Yesterday Steve Jobs stepped down as CEO of Apple. The Apple Board of Directors announced that Tim Cook, would replace him in this role; and that Steve Jobs has been elected Chairman of the Board. Cook will join the Board, effective immediately.

In his resignation letter to the Apple Board of Directors and the Apple Community, Jobs wrote:

“I have always said if there ever came a day when I could no longer meet my duties and expectations as Apple’s CEO, I would be the first to let you know. Unfortunately, that day has come.”

In a press statement, Art Levinson, Chairman of Genentech, on behalf of Apple’s Board said:

“Steve’s extraordinary vision and leadership saved Apple and guided it to its position as the world’s most innovative and valuable technology company,”  “Steve has made countless contributions to Apple’s success, and he has attracted and inspired Apple’s immensely creative employees and world class executive team. In his new role as Chairman of the Board, Steve will continue to serve Apple with his unique insights, creativity and inspiration.”

Cook was previously Apple’s COO, and his succession of Jobs as CEO was planned. “The Board has complete confidence that Tim is the right person to be our next CEO,” said Levinson. “Tim’s 13 years of service to Apple have been marked by outstanding performance, and he has demonstrated remarkable talent and sound judgment in everything he does.”

As COO, Cook was previously responsible for all of the company’s worldwide sales and operations, including end-to-end management of Apple’s supply chain, sales activities, and service and support in all markets and countries. He also headed Apple’s Macintosh division and played a key role in the continued development of strategic reseller and supplier relationships, ensuring flexibility in response to an increasingly demanding marketplace. 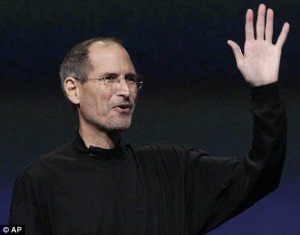 Jobs gave no reason for his resignation, however his lacking health is the single, most-likely cause. His long-term battle with cancer has left him frail in recent appearances, when he was barely able to walk. He is married, and a son plus two daughters.

Steve started Apple when he was 21. Currently, Apple is the world’s largest technology companies with a market cap of $337billion. Earlier this month, Apple even briefly surpassed Exxon Mobil, an oil giant, to become the world’s most valuable company.

Jobs has been an extra-ordinary leader and a visionary wizard, who managed to keep Apple a cool company while it grew into gigantic proportions.

Who is going to INSPIRE Apple next?
While Tim Cook is obviously a strong operations man given his tenure and track record, let’s see if Jobs’ marketing genius and CEO-succession planning included the building of a persona around Tim to replace Jobs as the new, strong visionary with unique persona so that Apple can continue its remarkable revolutionary leadership in the IT industry.