It’s no secret SugarCRM and Salesforce.com don’t like each other.

Last year, while attending Dreamforce 2009, dubbed “The Cloud Computing Event of the Year", I was handed a book shortly after parking my car at the Moscone garage. 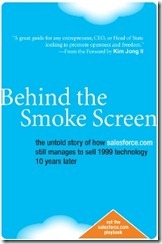 Today, you can even say that Salesforce runs on 1500 Dell Servers but I’ll leave that for Larry Ellison to comment.

Unfortunately, my copy was swiped during breakfast when I put it down to get a second cup of coffee.

I later saw that book on eBay!

I’ll be attending Dreamforce 2010 again this year (check out #DF10 on Twitter, the official hashtag for the event) so I’ll be sure to get there early on Day 1 and report back on this year’s shenanigans.

Behind the Cloud: The Untold Story of How Salesforce.com Went from Idea to Billion-Dollar Company-and Revolutionized an Industry